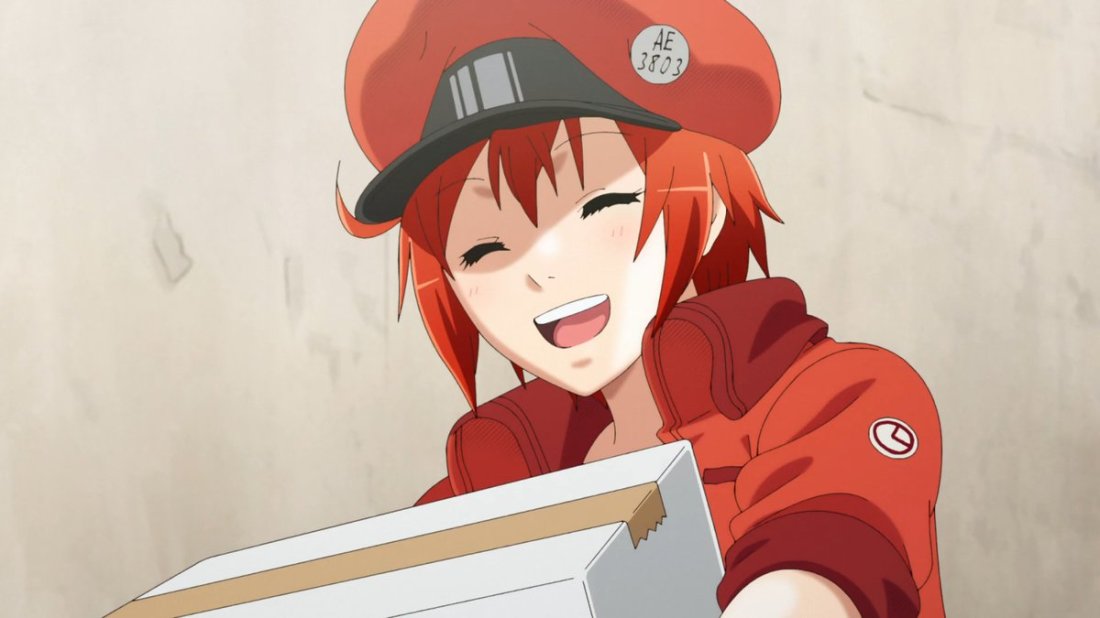 While I have talked about Cells at Work quite a bit in the past few weeks, now that the series is done, I decided to do a full review of the anime.

Cells at Work is a creative and unique anime that deals with personification of human cells and their “daily routine” in the body. The anime takes a creative approach in explaining what the body does in certain situations, like when someone scraps their knee or when they get heatstroke, by showing how the cells react, some by running away and others, like the immune cells trying to fight off bacteria or other contagions that enter the body. The series mostly follows a clumsy red blood cell and a more stoic white blood cell as they go about their life and try to keep the body alive and healthy. Along the way they meet a number of different types of cells, like Killer-T cells, memory cells, and adorable platelets. The anime also takes time, often stopping a seen to explain what a certain bacteria or cell is and what it does, so the viewer does not get lost with what is happening up on the screen. However these pauses are brief and never really cause a disruption in action scenes, at least in my opinion.

The anime is also very creative in each cells design, each design matching certain aspects of the cell it is based off of. For example, Red Blood Cells jacket is either lighter ( like in the picture) or darker depending on if she is carrying oxygen or not. The same can be said for the bacteria and locations of the body. When it comes to the characters, it does take a while for each of the main cells we follow to have a complete personality, as their personalities directly tie into their jobs and roles, however by the end most of the main cast has some solid characterization that helps make them more than just their cell and their role in the body.

The series also takes care in handling more touchy subjects, like Cancer, making sure not to show Cancer as a monstrous being, but still a malicious being that needs to be stopped like anything else that causes the body harm. I’ve already given more of my thoughts on the subject on a different post, if you are curious then click here to see my opinions on the First Cancer Arc.

Most of the animation is amazing, nothing seems wonky or done last second in the scenes that I can recall. However, whenever it showed a group of cells walking along with the main cast, the crowd was always done in CG animation while the main cast were in normal 2D animation, which were a slight eyesore, luckily the most of those shot focus on the main cast, or are just a wide shot that only last for a few seconds before they went on to the next scene.

Overall, this anime was extremely fun and interesting to watch as the characters and story were enjoyable, and it was also educational as well. I hope that this series does get a season two, as from what I read and seen from the manga there is still a lot more that can be done with this series. I would recommend this anime to anyone that enjoys a rather light-hearted anime, that can be extremely comical and entertaining to watch. I would especially recommend this to anyone who is majoring in any medical field or biological field involving human anatomy, as I learned more about the human body from this anime that I ever did in my biology class.